Eagle Plume spent his life collecting, selling, and appreciating American Indian art and culture. He touched the lives of many people with his friendship, ready smile, and many stories. Before his death in 1992, he established the Eagle Plume Foundation and also saw to it that his shop would carry on under the guidance of his adopted daughter Ann, her husband Dayton, and their daughter, Nico. Ann and Nico are enrolled members of the Northern Cheyenne tribe and the family has been involved for years with Indian art and culture. The whole family spent summers going to powwows and visiting Ann and Nico’s reservation in Southeastern Montana until they began working for Eagle Plume in the late seventies.

Dayton grew up on the prairies of Wyoming, always having an interest in Indian people and their art. He and Ann met while he was teaching school on the Wind River Reservation and soon married. He remains the backbone of the shop, possessing a special wit and knowledge of Indian art, setting the happy tone at Eagle Plume's.

Ann grew up in the small village of Birney, Montana, on the Northern Cheyenne reservation. Her Cheyenne name is Maxaaehma’heone (Medicine Eagle Feather Woman). She left her reservation to work with the Indian Health Service and has since traveled the U.S. exhibiting her beadwork, acted as an advisor to numerous museums, and operated her own gallery as well as a small non-profit entity in her home village.

Nico, whose Cheyenne name is Esevoneme’ehne’e (Buffalo Appearing Woman), has been involved with Native arts all her life - directing American Indian art galleries, occasionally lecturing on the subject of Indian art, serving on the advisory board of the First People’s Fund, and working as an appraiser of Indian art and antiquities. She has a fourteen-year-old son, Dah’som, who helps out at the shop too.

Under the family’s guidance, Eagle Plume’s remains one of the most remarkable emporiums of American Indian arts, crafts, and culture in the west. 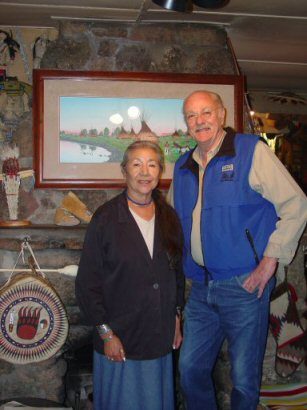